The Planetarium was constructed at Reed College, funded by a grant from the student group in charge of the school’s annual celebration ‘RennFayre’. The purpose of the work was to capture viewers in a space of pleasure and displeasure, to create powerful emotions and perceptions which would be disorienting and perhaps a little overwhelming, but at the same time beautiful and entrancing. For me, this is the power of light and sound sculpture generally, to strike at the most basic points of perception of the world, and interleave some doubt about what is truly seen or heard.

The Planetarium’s globe structure is built from butcher paper using a residue-free papier-mÃ¢chÃ© technique. The globe is hung from a flexible rod to give the sculpture some organic reaction to vertical perturbation. A DC motor installed at the hang point causes the globe to spin one way and the other at varying speeds causing the entire space to feel as though it is in motion, breathing clockwise and counterclockwise.

Inspiration for this work is drawn from a prior work by Bay Area artist Michael Christian’s sculpture ‘Home,’ a much larger, metal sculpture which received an honorarium art grant for Burning Man 2010. 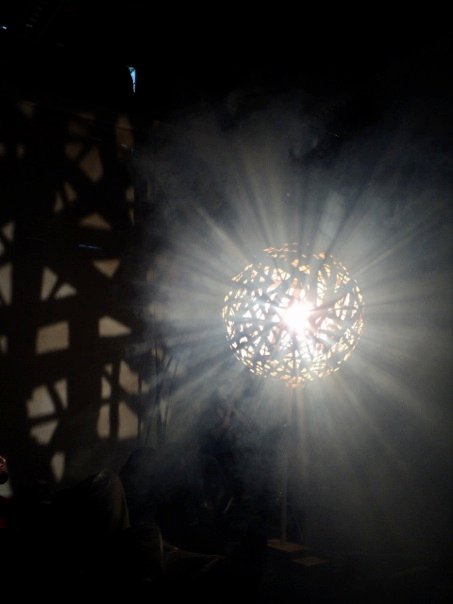