Frequency spectrum diagram of the first (pure) tone (red) and the second (Shepard) tone (blue) of the bistable tritone stimulus employed in the current experiment. The horizontal axis is logarithmic reflecting perceptual as opposed to physical distances between frequencies. The musical staff (upper right) shows the two possible perceived pitch movements from tone 1 to tone 2. Due to the pitch ambiguity of tone 2, listeners perceive this pitch as either E4 or E5, which results in ascending or descending pitch percepts relative to tone 1.

In 2011- 2012 I did some pretty interesting cognitive neuroscience work involving an auditory illusion called the tritone paradox, a cognitive phenomenon developed and studied through the ‘90s by Diana Deutsch Ph.D. and based on Shepard Tones which are constructed sounds made up of octave-related harmonics.  The work related this illusion to a prior body of work around bistable visual illusions such as the necker cube (a wire frame cube can be seen as two different shapes depending on which face is perceived as the ‘front’).  The tritone paradox arises when two sequential sounds have an ambiguous pitch relation, i.e. the second sound may be heard as higher or lower than the first.  When this pair is played many times a listener may hear “rising, rising, rising, falling” and at the moments when this perception reverses we can see unique electrical potentials in the brain.

In 2013 – 2014 I expanded on this research by isolating the behavioral aspects of the stimulus and comparing them to previously isolated behavioral characteristics of known bistable stimuli.  In late 2014 the resulting paper was published in Frontiers in Human Neuroscience!

This research combined my interests in human cognitive neuroscience, music theory and consciousness studies and gave me my first taste of professional neuroscience work and the peer reviewed publication process.  The neuroscience results are below.

Grand-averaged ERPs for stable and reversal trials and difference waves (reversal minus stable) at electrodes representative of the observed amplitude differences. ERPs were time-locked to tone 1, but note that the time scale is adjusted such that tone-2-onset was treated as time zero for analysis purposes (because tone 2 was the ambiguous tone). The time windows of the main components of interest are denoted by the dotted gray lines (see main text for details): aRN = auditory reversal negativity; aLPC = auditory late positive complex; PRP = pre-reversal positivity. 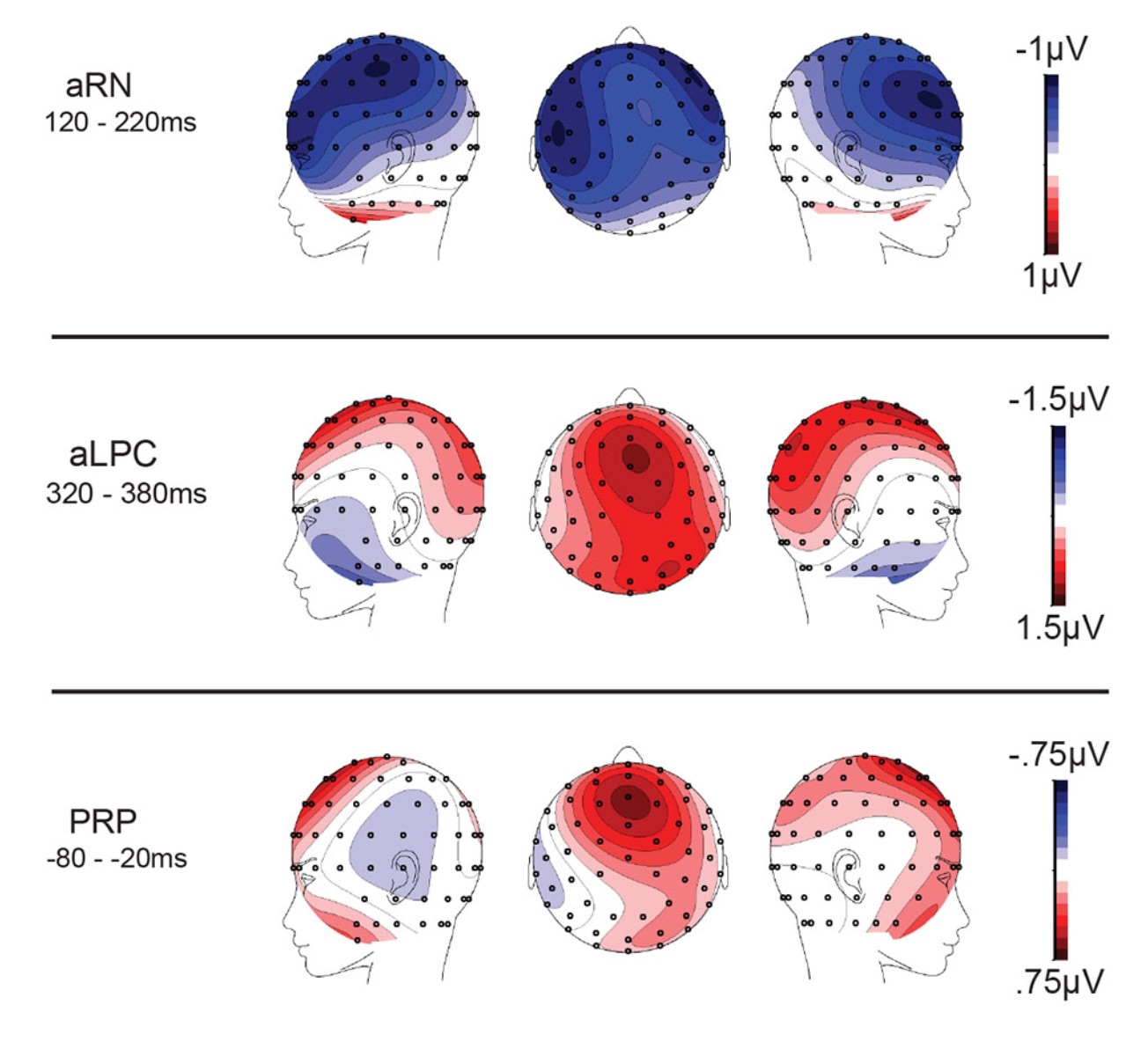 Grand-averaged difference wave topographies (reversal minus stable) for each of the components of interest, averaged across the indicated time windows. Time zero refers to tone-2-onset.